Ticket Prices Up for Jeter’s Last Trip to St. Louis

Many baseball analysts are far from shy about expressing their opinion about the state of Derek Jeter’s game in his 20th season in the big leagues, all of which have been spent with the New York Yankees. While “The Captain’s” reputation in The Bronx and in many hearts of baseball fans is that of a winner, a clutch hitter, a leader, and a defensive landmark, many advanced statistics and comprehensive analysts point to a player who has lost most of his pop at the plate and is a downright liability at shortstop.

Perhaps some people are tough on “Mr. November” because the New York spotlight and two decades at the top of the powerful Yankees lineup have made him a prime target for anyone who despises the “Evil Empire” of the Bronx Bombers; far more people are likely to rally to Jeter’s side because of those reasons, as these polarizing Yankees are also beloved by many, and their captain is beyond reproach in their eyes. 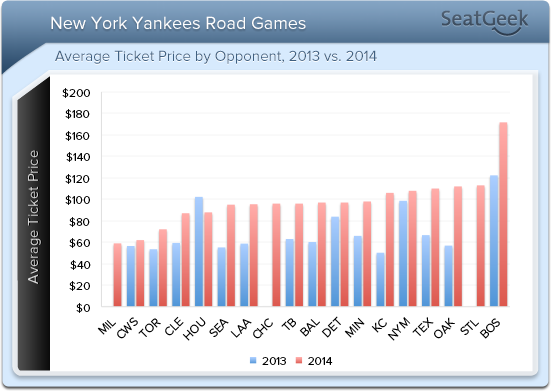 We’ll let you have the debate about Jeter’s merits as a baseball player with your friends over a pint or ‘2’ while we present something undeniable: as classic a draw as the Yankees always are on the road, Derek Jeter’s farewell tour is moving the meter more than usual. This week, the frenzy surrounding his impending retirement arrived in another classic baseball town – St. Louis.

The average price of a ticket purchased on the secondary market for one of the Yankee’s three games at Busch Stadium this week was $113, making it the most expensive regular season Cardinals series since the 2012 opening series against the Cubs from April 13-15 ($125 average ticket price), which included the 2011 World Series ring ceremony. Still, of the 18 cities the Yankees will visit this season, St. Louis is the 2nd-most expensive spot to see Jeter play his last games.

The most expensive road games the Yanks play this year are, of course, in Boston, where fans are paying an average of $172 per ticket to see them at Fenway. The final game of the Yankees’ regular season on Sept. 28 in Boston – which could be the last game Jeter ever plays – is drawing an average ticket price of $338, the highest we’ve ever seen for a regular season MLB game. But aside from games at Fenway Park against the Red Sox, Monday’s game at Busch Stadium was likely the most expensive road game the Yankees will play this year at an average price of $129 per ticket.

How to Get New York Yankees Playoff Tickets

A Brief History of the Red Sox-Yankees Rivalry

5 Tips: How To Get Cheap New York Yankees Tickets

How the MLB Season Looks After the First Two Weeks

A Brief History of the Little League World Series

The 10 Greatest Rivalries in Sports