Turner Field, home to the Atlanta Braves and opened officially in March 1997 for baseball, was originally used as the Centennial Olympic Stadium at the 1996 Summer Olympics. The stadium was then converted to a baseball stadium to serve as the home for the Braves.

Turner Field is located in the Southeastern Atlanta neighborhood of Summerhill. It is located on Hank Aaron Drive, which provides multiple parking areas including the Atlanta-Fulton County Stadium site which was converted into a parking lot. (source: Wikipedia)

The address for Turner Field is as follows:
755 Hank Aaron Drive
Atlanta, Georgia 30315

For a look at the seating chart for Turner Field, check out the image below. The venue seats 49,586 as of the 2012 season. 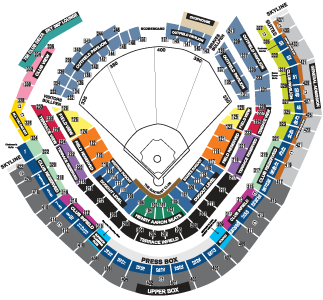 Turner Field offers tours of the ballpark. In a description found on the Braves website, here is what one can expect on a tour:

“Guided tours of Turner Field are offered year-round and begin in the Braves Museum & Hall of Fame. Tours start on the top of the hour, last approximately one hour, and take visitors to the areas listed below. No reservations are necessary for individuals or groups of less than 20 people. Walk-up tickets can be purchased on the day of your tour at the Braves ticket window at Turner Field and free parking is available in the Green Lot.”