UFC 154 is approaching, as the legendary Georges St. Pierre will be squaring off against bruiser Carlos Condit in Montreal, Quebec. At SeatGeek, we have an abundance of UFC fans, so we’ve been tracking tickets for this fight closely.

Before we get into the nitty-gritty of analyzing prices, are you just looking for tickets? If so, here’s the link:

That will direct you to the SeatGeek page for the event. For the uninitiated: SeatGeek is a free ticket search engine that shows all the tickets available on the web in one place (kinda like kayak.com for airline tickets), so you’re guaranteed to get the best deal.

Ticket prices for UFC 154 are surprisingly low, averaging only about $190 per ticket. Compare that to a monstrous $515 per ticket for UFC 148, which was in Las Vegas. Here’s a graph of how prices stack up compared to past UFC fights: 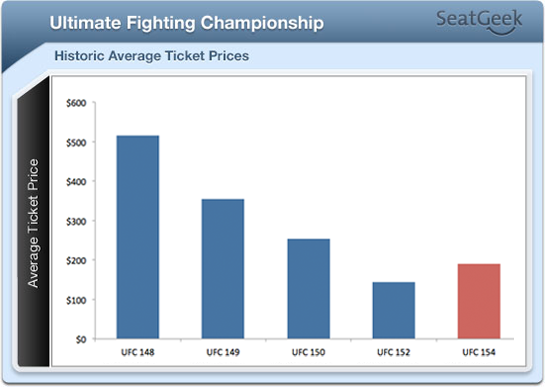 I can’t help noticing a a trend here. UFC 152 and 154 are the cheapest events by far, and they’re both in Canada. Coincidence? I’m inclined to think that it’s not. It shouldn’t come as a shock to any non-idiot that a UFC fight in, say, Las Vegas, would be a bigger draw than a fight located in the wilds of Canada. Canada, after all, is not Las Vegas.

We created at custom Bell Centre (note the weird spelling of “centre”…crazy Canadians!) seating chart at SeatGeek just for this fight. Here’s what the venue layout will look like: 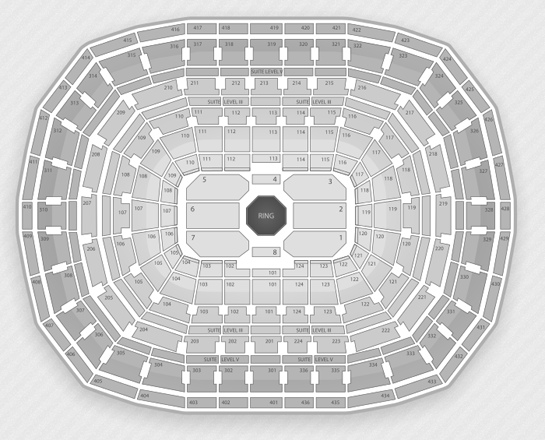 The priciest tickets are in sections 1-8 around the right, with the absolute most expensive in sections 4 and 8. Currently, the cheapest tickets in the 400’s sections are going for around $80/each.

The promo video for this fight is rather outstanding, in my opinion. Check it out:

There’s actually lots of good commentary in the YouTube comments. For example, @theSANCH81 says: “This will be really good. I really think this will be GSP’s toughest test yet. Condit has better striking than any other guy GSP has fought. Plus Condit’s jiu jitsu may be better than anyone he’s fought as well. He’s got the long lanky body, unlike Matt Serra. Condit can win this fight!”

St. Pierre Vs. Condit Tickets: This Is Your Chance

What does this all mean? If you want to see Georges St. Pierre fight live, and you don’t want to pay a ton of money, your answer is Canada. This is your chance. Of course, that does mean you have to…go to Canada. But bear in mind, Montreal is a mere six hours from New York City and a mere four from Boston. So if you live on the East Coast, it’s a heck of a lot more convenient than Las Vegas (or Brazil, etc…UFC fights are all over the place these days).

You could blame Canada, but that would be unfair, methinks. This is a rare chance to see a great fight for cheap. Still, I couldn’t write this post without including a favorite song:

Looking back at another cheap UFC fight: UFC 140

We previously blogged about UFC 140, and some of the odd low-price trends we saw there. Here’s a recap of what we wrote:

Despite the lack of buzz surrounding Jon Jones’ light-heavyweight title defense to Lyoto Machida this weekend, UFC 140: ‘Jones vs. Machida’ is, in fact, happening Saturday night. This fight isn’t generating the sort of buzz would one expect from such a dynamic, talented young champion, so what’s the problem? Is it an instance of a card simply being under-promoted? Or is this becoming a trend for Jones?

Tickets for UFC 140 are averaging at $210, about the going rate for a non-title headlined UFC fight card. Despite the average to low numbers, these prices are actually an improvement over his last fight at UFC 135 ($190) against Rampage Jackson. The highest average ticket prices involving the three actually came at UFC 123 when Jackson and Machida squared off for the right to face Jones for the title. Jackson went on to score a win over Machida via split decision. Now that Jackson has tried and failed, it’s Machida’s turn at the phenom. 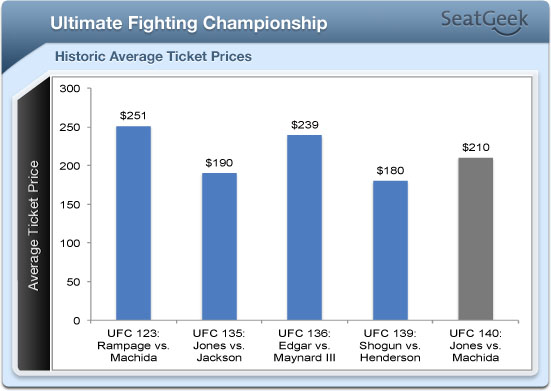 Tickets for UFC 140: Jones vs. Machida ranged on SeatGeek from upper deck seats for $94 to floor seats selling for $1700.

Questions/thoughts? Drop us a note in the comments below or hit us up at @SeatGeek.