USC Trojans Top the Pac-12 with Most Expensive Football Tickets

When the NCAA imposed heavy sanctions against the USC Trojans in 2010 after it was finally determined that star running back Reggie Bush received improper benefits while attending the university from 2003-2005, many were unsure how the punishment would affect the team’s future. Most programs cannot recover from a two-year bowl ban and the loss of 30 scholarships over a three-year period, but head coach Lane Kiffin has managed to lead the team to a No. 1 preseason ranking this season–just two years after the NCAA’s harsh ruling. With the Trojans now bowl eligible for the first time since 2010, fan interest is at a three-year high, which is reflected in home game ticket prices on the secondary market. 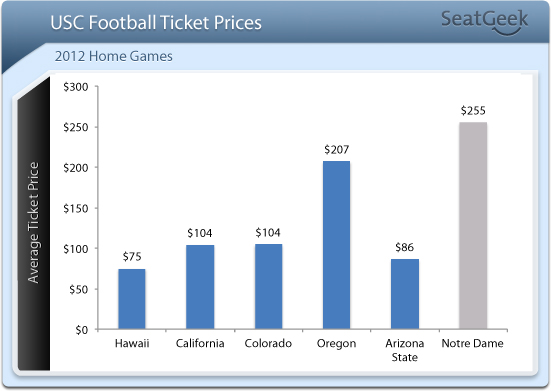