Vick Blows The Doors Off Redskins, Shattering Records Along The Way

Let’s first set the past aside, and focus on the Michael Vick of today. In a Monday Night Football game that we will not soon

forget, Vick lead the Philadelphia Eagles to an unbelievable victory against former Birds quarterback Donovan McNabb and the Washington Redskins. The first 18 seconds of the game set the scene; Vick drilled the ball to DeSean Jackson in the Redskins 35 for the longest scoring play in the receiver’s three year career. The Philadelphia players continued to connect on an almost magical level, finishing the first half at 45-14.

Michael Vick continued to run 80 rushing yards, throw, and connect 20 of 28 through the rest of the game, delivering a 59-28 crushing blow to the Redskins. A number of records were set that would be easiest to list out:

All of this just after news broke that Donovan McNabb would sign a five year contract worth $78 Million with the Redskins. The team’s second straight loss drops them to 3rd place in the NFC East with a record of 4-5, lagging behind the now first place tied Eagles and New York Giants.

We discussed the Redskins ticket prices as being historically steady in our post about the NFL’s Big 4 Disappointments, despite the ups and downs of the 2010 season with Shanahan. Still, we thought it would be beneficial to look at both Redskins and Eagles ticket prices at home. 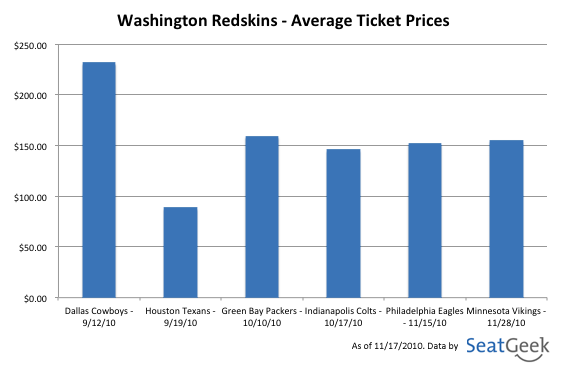 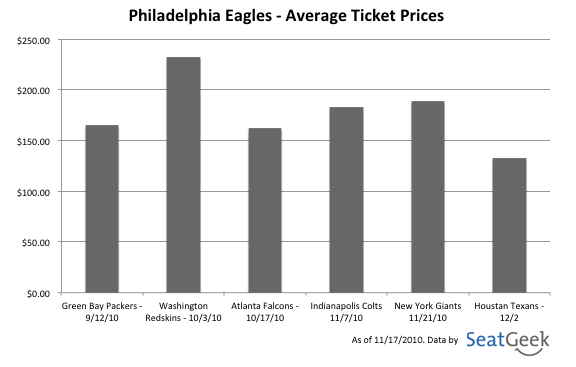 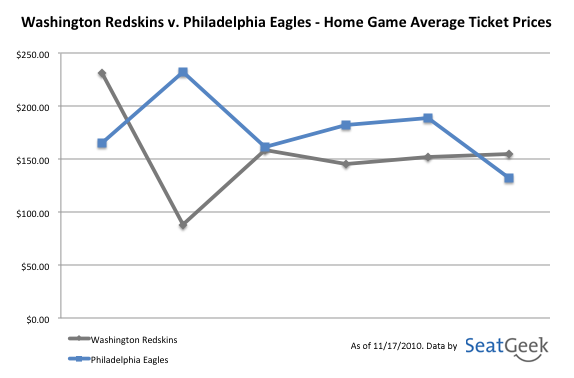 It’s obvious that despite the sharp dip in ticket prices around the Redskins second home game due to little demand to see the Texans, both teams have stayed neck and neck for home game prices. We will continue to track prices for both teams, as we anticipate a sharp increase in Eagles ticket prices if Vick can harness last week’s win to overtake the Giants for first place in the NFC East.

Let us know your thoughts on Michael Vick and the Eagles’ performance in the comments below or on Twitter @SeatGeek.