What to Expect From the New Atlanta Falcons Stadium

The new home of the Atlanta Falcons and the Atlanta United, the Mercedes-Benz Stadium, is scheduled to open on August 26, 2017. Located at 441 M.L.K. Drive in Atlanta, GA, the stadium broke ground on May 19, 2014 and has cost around $1.5 billion since that time.

After three years of construction and multiple delays on the opening date due to the complicated roof structure, the stadium is almost ready to open. An elaborate futuristic design, the stadium has an eight panel retractable roof that resembles a pinwheel and will allow for open-air play. There will also be a 360-degree halo board around the opening of the roof, which will be the largest video board in U.S. Sports. The stadium also features a floor-to-window ceiling that will give fans a view of Atlanta’s skyline.

Click here for a full listing of events at Mercedes-Benz Stadium on SeatGeek.

In addition to impressive architecture there will also be spectacular art, including the largest free-standing bird statue in the world at the stadium’s entrance, a 41.5-foot tall falcon with a 64-foot wingspan. The stadium holds a more open design than the Georgia Dome and provides many dining and seating options for fans. The stadium offers $2 unlimited water and non-alcoholic beverages and a large variety of dining options. There will also be a 100-yard bar spanning the length of the football field.

The Mercedes-Benz Stadium offers more seating flexibility than the Georgia Dome did. It can expand up to 75,000 seats for a future Super Bowl or World Cup, and up to 83,000 for events like the NCAA Final Four. For other events such as MLS games, shows and concerts, a curtaining system can be used for the mid and upper bowl to reduce the seating to the appropriate amount.

The Georgia Dome seat capacity for basketball was 71,000, for football was 74,228 and around 80,000 for concerts and other events. The Georgia Dome decommissioning is set to start November 20, 2017. The 13 acre site will be called “The Home Depot Backyard” and will serve as parking and tailgating areas for NFL and MLS games. Ticket options for fans include Personal Seat Licenses (PSL) with 23 different seat license pricing options and season tickets starting at $55 per game. 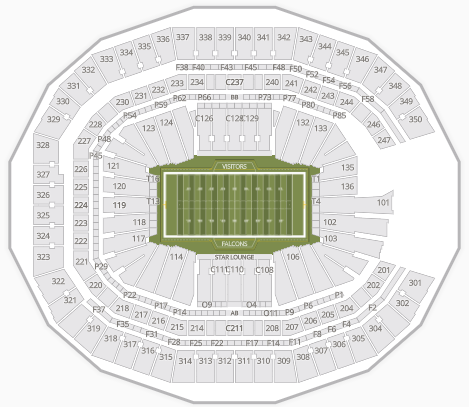 The stadium will be home to a number of big events within the first few years of opening. For starters, shortly after the opening the Chick-Fil-A Kick Off Game will be played at the stadium on September 2. On October 12, Garth Brooks will be the inaugural music performer in a sold-out concert with 73,000 tickets sold.

The stadium will also play host to some exciting sporting events. The Super Bowl LIII in 2019 will be held at the Mercedes-Benz Stadium, along with the Men’s NCAA Final Four in 2020. The Mercedes-Benz Stadium is also expected to host The Peach Bowl, the SEC Championship Game 2017 through 2027 and the College Football Playoff National Championship on January 18, 2018. On March 3, 2018 they will also host a round of AMA Supercross Championship, which had previously been held in the Georgia Dome since 1993.

To find out exactly what events are on deck for the new Mercedes-Benz Stadium, click here to browse the venue’s schedule on SeatGeek.

The Ultimate Guide to Mercedes-Benz Stadium