What’s a Home Team Goal Worth?

Although most NHL arenas are symmetric (I’m looking at you, Bridgestone Arena), the value of seats is a tale of two sides. Hockey games consist of three periods, meaning the home team shoots twice at one end of the ice. Is this value reflected in ticket prices on the resale market? How much are fans willing to pay to be closer to their home team’s goals? Luckily here at SeatGeek we have access to this data. I looked at regular season NHL games over the
2013 and 2013-14 seasons.

If there is an effect, we would expect it to be largest for those seats closest to the ice. So for each arena, I’ve calculated the average ticket price for seats within a contained region around each of the two goals. As an illustrative example, take TD Garden, the arena with the most tickets sold on the resale market over the past two seasons. It also happens to be a nicely symmetric arena. 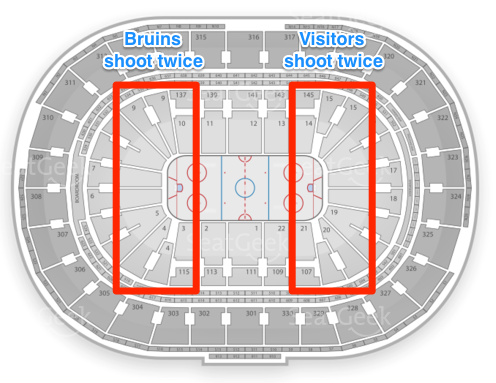 Over the last two seasons, tickets sold for an average of $181.06 in the visitors-shoot-twice end versus $205.32 in the Bruins-shoot-twice end. That’s a premium of $24.26 for twice as many opportunities to see the Bruins score.

When we look at these results league-wide, the results are less clear-cut, but there is an undeniable trend. Due to government regulations, there aren’t a lot of secondary market sales for the Winnipeg Jets, so I’ve excluded them. The large negative differential for the Toronto Maple Leafs is easily explained by the fact that they are more likely to score on their own goal than their opponents’.