Wisconsin Season Tickets Sell Out in One Hour

After three straight Rose Bowl bids from 2010-2012, the Wisconsin Badgers failed to win the Big Ten’s Leaders Division title last season, and thus failed to end their year in Pasadena at the “Grandaddy” of all college bowls. But hope springs eternal in Madison–and thankfully the Big Ten thought well enough to lose the Leaders and Legends divisions in favor of East and West–and loyal Badgers fans are anxious for a West title and the chance to win the Big Ten title game this December at Lucas Oil Stadium in Indianapolis.

There’s plenty of excitement after this year’s Spring Game, and two key match-ups are circled on every fan’s calendar as the biggest hurdles in getting to that West title and, hopefully, a spot in the inaugural four-team playoff for the national title. The first is the Texas Kickoff Classic against LSU, a premiere out of conference matchup to build the Badgers’ hopeful postseason resume. The second is a November 15 game versus relatively new conference rival Nebraska in the friendly confines of Camp Randall Stadium. These two teams don’t have decades of history, but they’re wasting no time making an impression on each other on the gridiron.

Even though it’s only June, all of this preseason excitement has started spilling over onto the secondary market for Wisconsin football tickets. At an average price of $96, demand for tickets to Wisconsin Badgers home games is the highest we’ve seen since 2011. The priciest game on UW’s schedule is the matchup with the Cornhuskers; fans have been paying an average of $147 per ticket. That’s the highest average ticket price for any Badgers home game since the 2011 game against the Huskers – a No. 7 vs. No. 8 matchup and Nebraska’s first game in the Big Ten – which drew an average price of $314.

Another new arrival is driving demand for one of the Badgers’ home games this year: the Maryland Terrapins. Despite a relatively weak home game slate (UW’s opponents went a combined 44-45 last season), the average price for the Maryland game is currently $123, making it the 6th-most expensive game at Camp Randall Stadium since we began monitoring the secondary market in 2009 and the 3rd-most expensive of the past two seasons. 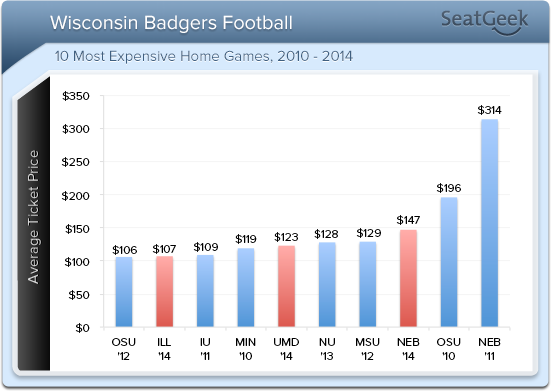 As a member of the Big Ten, Wisconsin hosts four conference games every year, but many of the Big Ten schools that drive demand for tickets (Michigan, Michigan State, Ohio State, Penn State) are in the East Division, and therefore UW only plays them sparingly. While the Badgers get Maryland this year, last year’s cross-division opponent was Penn State, and the average ticket to that game cost only $59 on the secondary market. This season’s four conference home games are averaging a combined $120 per ticket on the resale market, up 27% from an average of $87 in 2013.

Undergrad student season tickets (14,000!) sold out yesterday within an hour of going on sale. UW students who got their hands on them for $188 ($168 base + $20 fee) saved $232 on the single-game price; tickets range from $45-$75 depending on the game, and the cost of buying one ticket at face value to each adds up to $420. In fact, it makes sense as a UW undergrad to buy season tickets if you plan on going to four games, or even just three conference games. Buying the cheapest ticket available on the secondary market to each game is even more expensive ($436). Adult season ticket plans start at $315, which is actually cheaper than the combined cost of the least expensive resale ticket to UW’s four conference home games ($321)!

“Jump Around” at Camp Randall