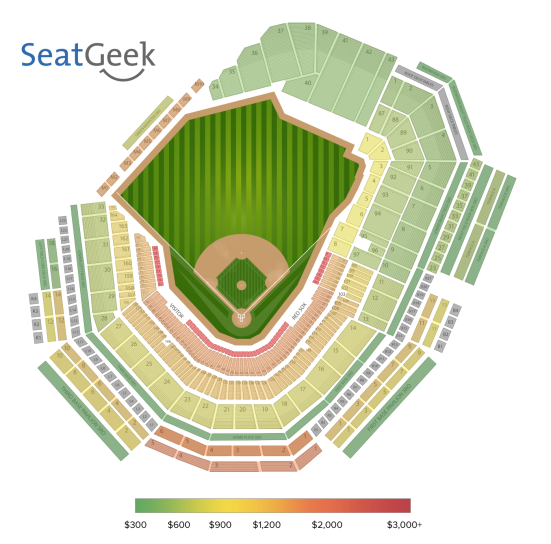 Think it’s appalling when multi-millionaires shell out dough on castles and Ferraris, when they could be spending their money on things that actually matter? I know, me too. Thankfully, they can make amends at this year’s Fall Classic, where tickets are approaching Ferrari-type prices.

OK, so that’s a slight exaggeration, but here’s the truth. The average price of a Red Sox-Cardinals World Series ticket is $750, making this the most expensive Fall Classic since we began tracking such data in 2009. Prices are up 22 percent from last year’s Giants-Tigers World Series, which drew an average ticket price of $614 on the secondary market. Tickets to the games at Fenway are selling for three times face value on the secondary market, and seats in the bleachers and outfield grandstands start at just under $400 apiece.

And get this: Red Sox fans will have to pay almost $200 more per ticket to see the games in Boston than Cardinals fans will have to pay to see the games in St. Louis. The average resale price of a ticket for a World Series game at Fenway Park is $868, 25 percent higher than the average price of $690 at Busch Stadium. Tickets for Game 1 last night started at just over $300, and we’ve seen some fans pay as much as $6,000 per ticket for dugout box seats.

See those dark red seats in Fenway? Yeah, those are $3,000+ per seat. I’m tempted to add three exclamation points after that last sentence, but I’m a grown up, so I won’t.

But let’s put those big numbers in context. How do they compare to other sports in Boston? Turns out, the World Series games in Boston are more expensive than Bruins Stanley Cup Finals tickets. The average resale price of a ticket to a Finals game at the TD Garden this past June was $839. So yeah, they’re kind of a big deal.

For fun, let’s talk about how these tickets could go from being the kind of a big deal they already are to being a humungous deal. The answer? Game 7. If this year’s World Series goes the distance, Game 7 in Boston would be the most expensive baseball game we’ve ever tracked. Tickets for a potential seventh game at Fenway Park are selling for $1,044 each on average. On average!!! (There, couldn’t resist.)

So if you’re one of those multi-millionaires, take a well-deserved break from those exhausting flights around the world on your private jet and contribute to something that matters – buy some tickets to this year’s World Series. If you’re feeling downright charitable, go ahead and buy front row tickets behind home plate for Game 7. It’ll cost you roughly a bajillion dollars – and that’s before sales tax – but it’s for a good cause.