Since Lin Manuel Miranda departed Hamilton on July 9, tickets for the historic musical have dropped significantly. Currently, tickets are available for under $500–the lowest they have been in months.

Prior to Miranda’s June 2 announcement that his last show would be July 9, tickets to July 2016 Hamilton performances from now until the end of this month averaged a median listing price of over $1,600 and a “get-in” price (cheapest ticket) of nearly $1,000. Today, fans can get into those same shows for as low as $350, a relative bargain. 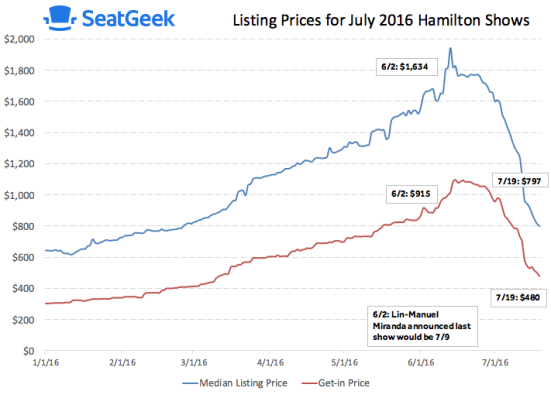 In addition, when looking at average resale prices (purchase data), fans paid over $1,300 on average for resale tickets to shows between June 3 and July 9, Miranda’s final stretch of performances. Since that last show, the average resale price has fallen to about $750.

Interested in attending Hamilton? Head here to browse for tickets. | Need to sell your Hamilton tickets? Head here to list them on SeatGeek.

The Best Broadway Shows in 2020: Everything You Need to Know

Everything You Need to Know About ‘Hamilton’ in San Francisco

How to Get Tickets to ‘Hamilton’ (For Real)

What Tickets to Get the Broadway Fan for the Holidays

Most In-Demand Event in Each State in 2016

Get $100 Off ‘Hamilton’ Tickets On SeatGeek!

Summer’s Hottest Events: Where and How Much?

And the Tony Award Nominees Are…