Breaking Down The Masters Course Map

Use code MASTERS20 at checkout to save $20 off your purchase!

On the first week of April each year, golf’s marquee event takes place in Augusta, Georgia: The Masters Golf Tournament.

Over 250,000 golf fans will make the pilgrimage to northeast Georgia to witness the event in person. If you’re one of the lucky few planning on attending, or if you’re just looking to learn more about the tournament itself, now’s a good time to get familiar with how the course is laid out at Augusta National. 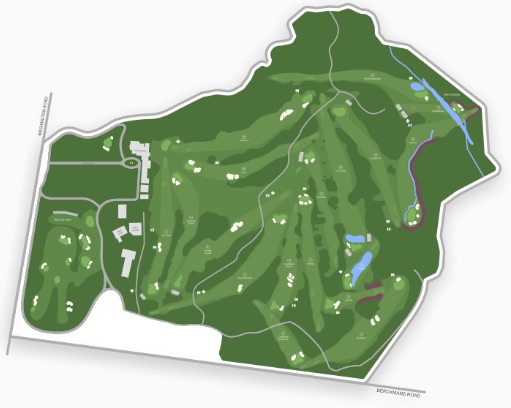 Augusta National starts things off with a bang with the first hole, dubbed “Tea Olive,” which is a 445-yard Par 4 which features a dogleg right. Golfers will need to be on their A-game from the get-go as Tea Olive was the third hardest hole on the golf course last year. Last year’s competitors were only able to birdie the hole 18 times across all four rounds. The number of birdies pales in comparison to 83 bogeys or worse that were scored on the first hole in 2018.

Named after the pink dogwood flowers that are seen at various spots around the hole, the second hole is a fan favorite 575-yard Par 5. Fans tend to like this hole because the players are sometimes able to make it to the green in two shots if they can drive the ball far enough off the tee.

Despite having four tricky fairway bunkers and relatively small green, the third hole tends to be one of the easier holes due to its short distance. At just 350 yards to the pin, “Flowering Peach” is the shortest Par 4 on the course by 90 yards. In 2018, the third hole was the only hole on the course that didn’t have a single golfer shoot a double bogey or worse.

After two of the easier holes on the course, the difficulty ramps back up again with the fourth hole which is a 240-yard Par 3. Flowering Crab Apple was the second most difficult hole in 2018, due to the length from tee to green and the two bunkers which flank both sides of the green. In order to succeed on this tricky layout, this year’s competitors will need to hit their long-irons well in order to get the ball to stick on the boomerang-shaped green.

Hole 5 was the sixth-hardest hole at last year’s Masters, and from the sound of things, it’s about to be significantly tougher this year. Renovations were recently completed to the hole which pushed the tee box back across Old Berckmans Road. The new renovation will increase the hole’s distance significantly, so it will be interesting to see what types of scores are posted on this hole in 2019.

The sixth hole is the second of the course’s four Par 3s, and while it’s not quite as difficult as Flowering Crab Apple, it’s still quite tricky. Juniper features a large green, which is a bit of a double-edged sword as it can make for long putts if your ball lands on the wrong side of the green.

The seventh hole at Augusta is yet another difficult Par 4, which goes by the nickname “Pampas.” Pampas can be a very unforgiving hole due to its narrow fairway and collection of five bunkers which surround both the front and back of the green. During last year’s tournament, there were 73 bogeys recorded on Hole 7, along with 14 double bogeys or worse, making it the fourth-most difficult hole.

After a string of three tough holes, the 570-yard Par 5 eighth hole will provide a bit of relief to the players as it played as one of the three easiest holes on the course last year. Yellow Jasmine is an uphill hole that features a bunker at the right-hand side of a relatively narrow fairway. The green is protected by a series of mounds, which makes the green one of the more interesting looking ones in the entire course.

The final hole of the front nine is a fan favorite nicknamed “Carolina Cherry” and is a 460-yard Par 4. Carolina Cherry features a green that is sloped heavily from the back to the front, which means that if players aren’t careful their shots that land short of the hole often roll back entirely off the green. Golfers will likely be happy with a par on this hole, since there are two large bunkers flanking the left side of the aforementioned tricky greens.
Back Nine

The first hole of the back nine has historically been the toughest hole for golfers to navigate, as the historical scoring average on “Camellia” sits at .31 strokes over par. The 495-yard Par 4 is tough on golfers due to a humongous fairway bunker in addition to trees looming large on the right-hand side of the fairway.

Hole number 11 is the beginning of a stretch of holes nicknamed “Amen Corner” which also includes holes 12 and 13. The first out of this trio of holes is “White Dogwood” which is a 505-yard Par 4 that has historically been the second toughest hole on the course. White Dogwood has historically played .29 strokes over par thanks largely to a green that is situated between a pond on the left side and a bunker on the right side.

The 12th hole at Augusta is one of the more recognizable and picturesque holes in all of golf, thanks to a notoriously hard-to-hit green which has a creek in front of it and trees behind it. On top of its hazards, Golden Bell has also been prone to wind, which makes it tricky for the players to pick the right club to keep their ball out of the bunkers and water.

After a three-hole stretch which includes three of the four historically toughest holes on the course, the players will be relieved to see Azalea, which is a 510-yard Par 5 that plays .21 strokes under par. Named after the Azalea plant that can be seen in numerous spots at August National, the 13th hole was particularly kind to golfers in 2018, as there were 9 Eagles and 128 birdies recorded.

The second-to-last Par 4, “Chinese Fir” is notable because it is the only hole on the course without bunkers. Despite the lack of bunkers, this hole has proven to be far from easy because it’s historically had the trickiest greens to put on, due to their severe undulations.

Akin to Golden Bell, the 530-yard Par 5 Firethorn’s green is isolated from the fairway by a pond. However, the 15th hole is much more manageable for players because it’s a relatively short Par 5 where long-driving players can make it to the green in two. 2018 Masters Champion Patrick Reed was able to make an eagle on Firethorn in his third round by chipping it in from the rough, which helped him post a third round score of five under par.

The 16th hole at Augusta will be familiar to some due to an incredible moment that took place at Redbud in the 2005 Masters. Leading by a stroke, Tiger Woods’ tee shot ended up in the rough to the left of the hole, but he was able to make a tremendous birdie by chipping the ball about 20 feet to the left of the hole. Woods read the slope perfectly, and the ball slowly rolled all the way down to the lip of the cup, where it stopped for a split second before finally falling into the hole.

The 440-yard Par 4 17th hole is a straight-forward endeavor – until you make it to the green. Nandina’s putting greens are notoriously hard and finicky, as two-time Masters runner-up Justin Rose can attest to. Rose was leading Sergio Garcia by one stroke going into the 17th back in 2017, but he ended up two-putting the hole, opening the door for Garcia, who went on to win the tournament in a playoff.

The final hole at Augusta is a 465-yard Par 4 which is an uphill hole with a dogleg right. The 18th hole is noteworthy for its four bunkers, two of them are located to the left of the fairway and two of them are located on each of the front sides of the green. With the bunkers flanking the left side of the fairway, and the trees close to the right, hitting the ball well off the tee is a must.

Tickets to The Masters are currently on sale. Shop on SeatGeek and save $20 off your purchase by entering code MASTERS20 at checkout. Browse all tickets here or view select listings below.