More Than Just The Ivy, Take A Trip To Wrigley

Wrigley Field, home of the Chicago Cubs, was opened on April 23, 1914 and is the oldest ballpark in the National League and the second oldest in all of Major League Baseball behind Fenway Park.

The ballpark is surrounded by residential streets, bars, restaurants and other local businesses in a neighborhood that has become to be known as Wrigleyville. Wrigley Field is nicknamed The Friendly Confines, a phrase popularized by “Mr. Cub”, Hall of Famer Ernie Banks. The current capacity is 41,009, making Wrigley Field the 10th-smallest actively used ballpark. (source: Wikipedia)

Wrigley is best known for its ivy-covered outfield walls, making it unique among all MLB ballparks.

Unfortunately for Cubs fans, the history of Wrigley has not seen a Cubs World Series championship. The Cubs won the World Series way back in 1908, before they moved to Wrigley as their home field.

The Ricketts family, owners of the Cubs since 2009, have been pushing for major renovations to Wrigley Field and it appears that their wishes may come true in 2013. Their plans called for big upgrades to the stadium’s facade, infrastructure, restrooms, concourses, suites, press box, and clubhouses, as well as the addition of restaurants, patio areas, batting tunnels, a jumbotron, and an adjacent hotel. (source: Wikipedia) More to come as those plans evolve. Hopefully for Cubs fans they will get a new and improved Wrigley Field.

Take a look at the seating chart at The Friendly Confines of Wrigley Field. The best deals on tickets can be found right here at SeatGeek. 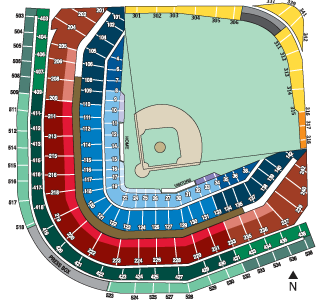