The fans have spoken

"There is no website that does as good of a job at organizing the available tickets and showing the cost with fees."

"Love this website! Prices usually come out cheaper than all the other websites as well!" 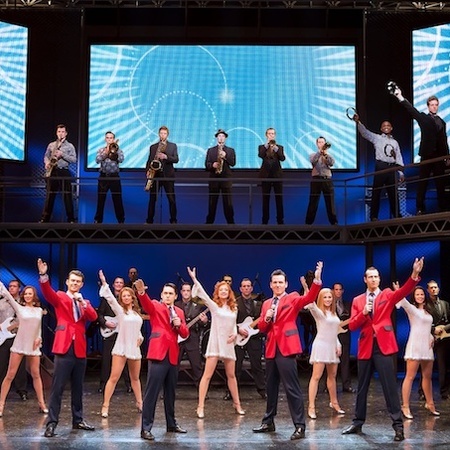 Jersey Boys, the documentary-style story of how Frankie Valli and The Four Seasons became an international music sensation, opened on Broadway November 6th, 2005 after a successful run at the La Jolla Play House from 2004-2005. Featuring beloved songs by Frankie Valli and The Four Seasons, Jersey Boys has won four Tony Awards, including Best Musical (2006), a Grammy Award for Best Musical show album (2007), and a Laurence Olivier Award for Best New Musical (2009). Jersey Boys is presented in four “seasons”, with each season narrated by a different member of the band.

Aaron De Jesus is brilliant as Frankie Valli, his smooth voice capturing the original feel of the iconic songs effortlessly. De Jesus is a veteran of the stage, with credits in productions of The Lion King, Wicked, Peter Pan, Little Shop of Horrors and The Crucible, just to name a few. A multitalented actor known for his ability to fully step into any role he takes on, his portrayal of Frankie Valli is absolutely spot on and powerfully realistic.

Nicolas Dromard is commanding as Tommy DeVito, returning to Jersey Boys after closing the Broadway production in the same role. Already critically acclaimed for his previous portrayal of DeVito, Dromard’s superb acting is engaging. The rapport between him and the other characters is so natural that it’s almost as if the real Tommy DeVito himself is onstage. Dromard has been in productions such as Wicked, West Side Story, and Hairspray. He is versatile enough to go from modern musicals to the classics, but Nicolas Dromard really shines as Tommy DeVito in Jersey Boys.

Natalie Gallo is lending her talents to the role of Mary Delgado once again, to the delight of Jersey Boys fans who enjoyed her both on tour nationally and as a replacement in the Original Broadway Production. A talented actress and vocalist, she’s credited with roles in several stage productions, including Mamma Mia!, In the Heights, and Clinton the Musical. It takes heart and a lot of grit to play the first wife of an international pop superstar, and Natalie Gallo does not disappoint. Natalie Gallo’s performance is so moving that audiences will easily connect with Mary Delgado, feeling her pain as the strain of Frankie Valli’s music career on their young family ends their marriage.

What is Jersey Boys about?

Jersey Boys is a documentary-style story of how Frankie Valli and The Four Seasons became an international music sensation.


How much are Jersey Boys tickets?

Jersey Boys ticket prices on the secondary market can vary widely depending on the location, day of the week, season, and other factors. Jersey Boys tickets can be found for as low as $63.00, however the national average is $110.00.

What is the recommended age for Jersey Boys Broadway?

Most shows will have both a recommended age limit and minimum age requirements. Generally, children under the age of 4 are not permitted at Broadway shows. Jersey Boys is intended for ages 12 and up.


How long is Jersey Boys the musical?

Jersey Boys is approximately 2 hours and 30 minutes long, including one 15 minute intermission.


What should I wear to Jersey Boys on Broadway?

There is no specific dress code for Jersey Boys. Some people like to dress up an others will go in jeans. It is recommended to avoid anything too casual such as tank tops and cut off shorts.


Who was in the original cast of Jersey Boys?