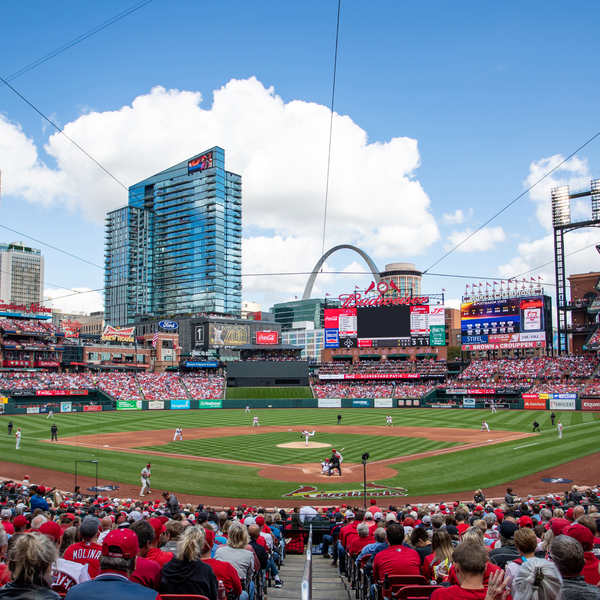 Busch Stadium is located in downtown St. Louis and is the home to Major League Baseball’s St. Louis Cardinals. The stadium is the third in St. Louis to be called Busch Stadium. The original park was named for team owner Gussie Busch, the Company Chairman of Anheuser-Busch, which became the largest brewery in the world under Gussie. Anheuser-Busch continues to brew in St. Louis.

The park opened in 2006 and occupies some of the same space where the previous Busch Stadium stood. The stadium’s listed capacity for baseball is 45,529. The stadium was quickly the home of a champion: the Cardinals won the World Series on their home field during the stadium’s inaugural season, defeating the Detroit Tigers in five games. The stadium would host a second World Series just five years later, as the Cardinals faced the Texas Rangers in the 2011 Series. Busch Stadium would be the site of a second championship celebration, as the Cardinals defeated the Rangers in a Game 7 at home.

The Cardinals hosted the MLB All-Star Game in 2009. Cardinals first baseman Albert Pujols had more All-Star votes that year than any other player.

In 2017, Busch Stadium hosted the National Hockey League’s annual Winter Classic. It was the first time the event was held in St. Louis and, naturally, the first hockey game played at Busch Stadium. The St. Louis Blues defeated the Chicago Blackhawks 4-1 in front of a sellout crowd.

Busch Stadium has also been the venue for a number of major concerts, including Paul McCartney in 2016 and Metallica and Billy Joel in 2017.

The Cardinals and Busch Stadium have played an important role in the development of downtown St. Louis. The nearby Ballpark Village opened in 2014 and has added a number of food and entertainment options. The second “phase” of the Ballpark Village project is scheduled to finish in 2019 and includes a high rise residential tower with a view of the ballpark.

What events are at Busch Stadium?

Busch Stadium is primarily used as the home of MLB's St. Louis Cardinals. However, Busch Stadium does host a number of concerts and other events. See full Busch Stadium schedule above.

How much are tickets at Busch Stadium?

Where is Busch Stadium?

Image credit for St. Louis Cardinals: This image is available through Creative Commons on Flickr and has been modified from the original. Email images@seatgeek.com with any questions.