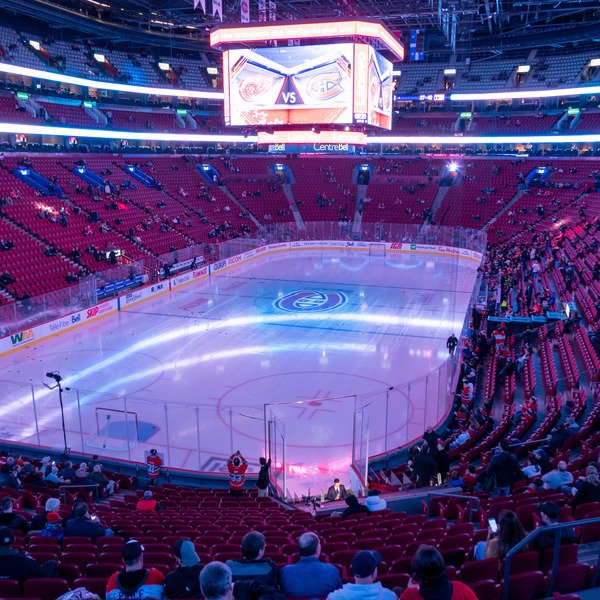 Formerly known as the Molson Centre (or Le Centre Molson for French speakers), Montreal's Bell Centre has been the home of Canadiens hockey since opening in 1996. It replaced the old Montreal Forum, which stood since 1924 and was one of the most historically significant buildings in Canada's hockey history. The Bell Centre is an impressive arena in its own right and, seating more than 21,273, it's the largest venue to be regularly used by an NHL team in North America. It covers over 3.5 acres.

Right downtown, the Bell Centre is an important part of life in Montreal and one of the busiest arenas in the world. It regularly draws the biggest annual crowds of any Canadian arena, and in 2012 it was named the 5th busiest arena in the world for non-sports ticket sales with over 600,000 tickets sold.

Of course, the biggest draw is Montreal Canadiens games, which consistently sell out. Notably, for the 7th game in the NHL playoff series against the Pittsburgh Penguins, all seats sold out with 45 minutes of becoming available. That game is also famous for the sheer level of noise created by Canadiens fans -- allegedly reaching over 135 decibels after goals.

Bell Centre hosts other sports on a less regular basis. The venue has held a few preseason NBA basketball games, usually featuring the Toronto Raptors. Interestingly, the Bell Centre was the home of the first ever UFC event to take place in Canada -- UFC 83 in 2008. Since then, the venue has seen a few more UFC events, and it regularly hosts WWE wrestling events as well.

As a concert and entertainment venue, the Bell Centre has welcomed acts as diverse as Kanye West, Iron Maiden, Lady Gaga, Tom Petty, and Celine Dion. Dion set a record at the arena, selling out eleven shows within an hour. In the winter, the Bell Centre hosts an annual performance by Cirque du Soleil.

What events are at Bell Centre?

Bell Centre is primarily used as the home of NHL's Montreal Canadiens. However, Bell Centre does host a number of concerts and other events. See full Bell Centre schedule above.

How much are tickets at Bell Centre?

Where is Bell Centre?