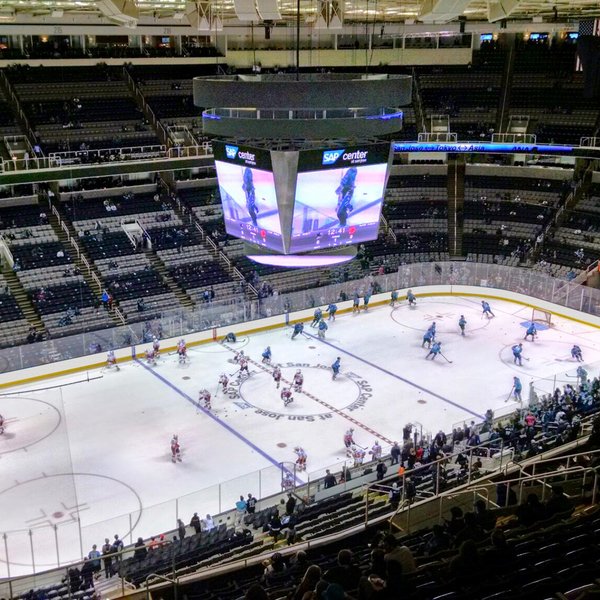 Located in San Jose, California, the SAP Center plays the home to the San Jose Sharks of the National Hockey League. Affectionately known as the Shark Tank, the venue opened in 1993 and regularly plays host to playoff hockey when the Sharks qualify. Beyond hockey, the venue serves as the home for many music and entertainment events every year.

The construction for SAP Center began in 2001, with the NHL announcing the Sharks as their latest expansion team shortly after. Since then, the Sharks have won a Western Conference championship in the 2015-2016 season, won the Presidents' Trophy in the 2008-2009 campaign, and have won their division six times, with the SAP Center being their home for those successes. In 2016, the Stanley Cup Final took place in SAP Center, with games 3, 4, and 6 against the Pittsburgh Penguins being hosted in the Shark Tank.

SAP Center has also been the home to teams in the Arena Football League, American Hockey League, National Lacrosse League, and even was the home of the Golden State Warriors for a season in the 1996-1997 campaign. Media activities for Super Bowl 50 were held at SAP Center, with the game itself being hosted in Santa Clara at Levi's Stadium.

The West Regional final of the 2017 NCAA Tournament also took place at SAP Center, which saw the 1-seed Gonzaga Bulldogs advance to the Final Four after defeating 11-seed Xavier in the Elite Eight game. The venue also hosted the Sweet Sixteen round, which was where Xavier managed to knock off 2-seed Arizona with a late comeback, in one of the truly memorable games in NCAA Tournament history.

SAP Center has also hosted figure skating championship events, the arena football championship game, and a UFC pay-per-view during its history, one full of championship-level events.

What events are at SAP Center?

SAP Center is primarily used as the home of NHL's San Jose Sharks. However, SAP Center does host a number of other concerts and events. See full SAP Center schedule above.

How much are tickets at SAP Center?

Where is SAP Center?

Image credit for San Jose Sharks: This image is available through Creative Commons (@photographingtravis - Flickr) and has been modified from the original. Email images@seatgeek.com with any questions.