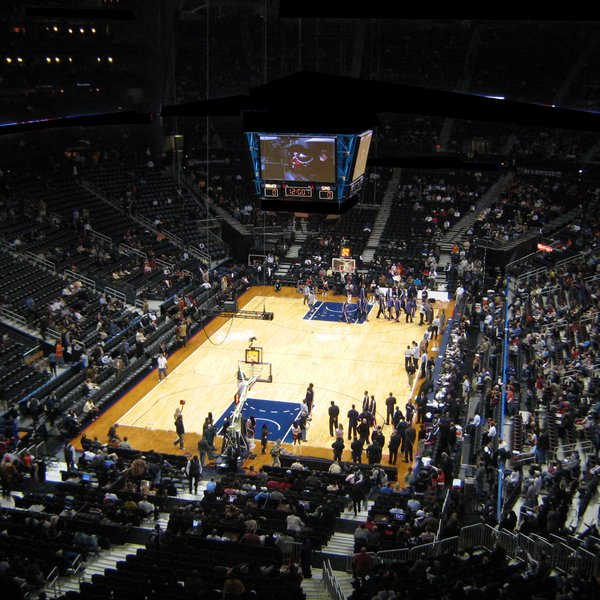 Atlanta's Philips Arena is the home of the NBA's Atlanta Hawks and the WNBA's Atlanta Dream. It was built in 1999 to replace the previous home of basketball in Atlanta, the Omni Coliseum. Since then has seen more than 23 million visitors, attending as many as 160 events each year. It seats up to 18,118 for basketball games and 17,700 for concerts.

Built to update the Hawks' previous venue and modernize Atlanta's sports space, the Philips Arena has a unique layout that accentuates its presence in Atlanta's busy Centennial Park District -- outer steel columns spell out "ATLANTA" along one side of the arena. Inside, club and VIP seating is arranged along one side of the court so that more total seats could be closer to the game. In 2009, the arena gained LEED certification -- becoming the first previously-existing NBA arena to receive this honor based on operation and performance measures.

Located in the Centennial Park District, the Philips Arena sits near several other Atlanta landmarks. The CNN Center is right next door and the facade facing it used to spell out "CNN" as a nod to the arena's neighbor. Other Centennial Park District attractions include the Georgia Dome, the Centennial Olympic Park, Georgia World Congress Center, and the Georgia Aquarium. Beyond that, you'll find a range of restaurants -- from high-end dining to fast food -- as well as lounges, bars, and more. You can easily make a day of a basketball game at Philips Arena, with lots to explore around the arena as well as inside.

In addition to basketball, you can find concerts, family events, conferences, MMA matches, wrestling, and more. For concerts, it's one of the busiest venues in the world, ranked among the top ten busiest in 2008. The first musical performer to visit was Sir Elton John, whose performance was the first event ever held in the newly constructed Philips Arena.

What events are at State Farm Arena?

How much are tickets at State Farm Arena?

Where is State Farm Arena?