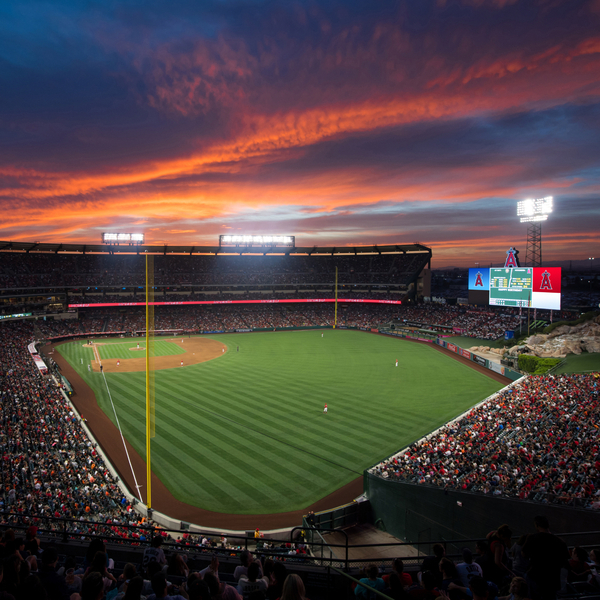 Angel Stadium of Anaheim has been the home of the Los Angeles Angels since 1966. It is the fourth oldest ballpark in Major League Baseball, and is located in Anaheim, CA.

The Angels shared their stadium with the Los Angeles Rams from 1980-1994. The stadium was expanded to accommodate the Rams — much to the chagrin of Angels fans, as many of the new seats were too far from the game. After the Rams left for St. Louis, the Angels converted their stadium back into a baseball-only facility. The stadium’s current capacity for baseball is 45,477, down from over 64,000 in the late 80s and early 90s. Reducing the seating capacity allowed for aesthetic improvements to the park and the sightlines to the mountain ranges past the outfield. The renovations also added the “California Spectacular,” a display behind the outfield fence in left-center. The display depicts a mountainside — complete with real trees — and features erupting geysers. Make sure to look in the direction of left-centerfield after the Angels hit a homerun: fireworks will shoot over the display.

One of Angel Stadium’s most famous landmarks is “The Big A.” The A is a 230-foot tall metal structure that stands in the stadium’s parking lot. The halo at the top of the A lights up after every Angels win.

Angel Stadium of Anaheim has hosted three All-Star games, most recently in 2010, when the National League won and broke a 13-year losing streak. The park hosted the World Series for the first time in 2002. The Angels’ playoff run that year also marked the first time the team had won a playoff series. Angel Stadium — then called Edison International Field — was the site of a dramatic Angels comeback in game six, and of their game seven victory over the San Francisco Giants.

The park is also used for non-baseball events. U2 has played three concerts there, most recently in 2011. In 2017, Angel Field hosts the Day N Night festival, featuring acts such as Kendrick Lamar and Chance the Rapper.

What events are at Angel Stadium of Anaheim?

How much are tickets at Angel Stadium of Anaheim?

Where is Angel Stadium of Anaheim?

Image credit for Los Angeles Angels: This image is available through Creative Commons on Flickr and has been modified from the original. Email images@seatgeek.com with any questions.