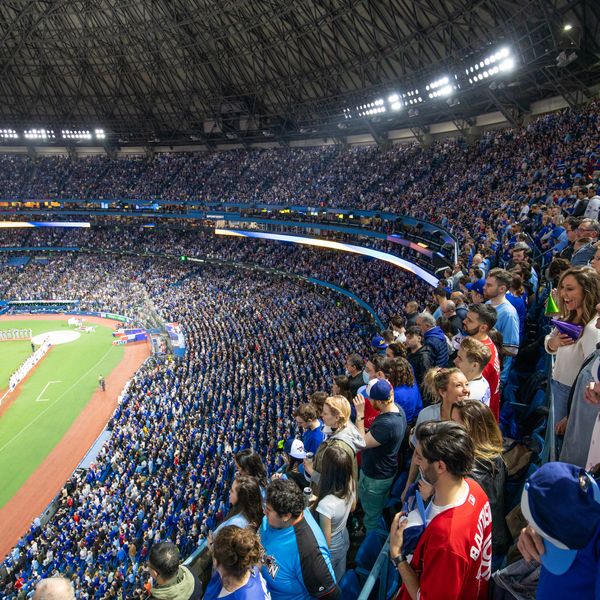 Rogers Centre opened in 1989 to be the home of the Toronto Blue Jays of Major League Baseball. Known as the SkyDome, the venue has seen success for the Blue Jays, as well as plenty of other notable events in the world of sports and beyond. Renamed the Rogers Centre in 2005, the building has hosted four different major sports teams in Toronto, along with some of the biggest names in entertainment in its history.

The decision to build Rogers Centre was based on the perceived need for a retractable roof venue in Toronto. That conversation started after a Grey Cup game, the championship game of the Canadian Football League, which was played in Toronto during a massive rain storm. The retractable roof of the Rogers Centre allows the team to play in an outdoor venue during clear weather, and indoors during inclement weather, reducing cancellations of events.

Toronto has witnessed two championship teams since the Rogers Centre was built, when the Blue Jays won back to back World Series titles in 1992 and 1993. The highlight of those two titles came in Game 6 of the 1993 series against the Philadelphia Phillies, when Joe Carter sent the SkyDome into euphoria with a walk-off home run that secured the championship for the Blue Jays.

Other teams that have been hosted at Rogers Centre include the Toronto Argonauts of the Canadian Football League, and the Toronto Raptors, who played their NBA home games at the SkyDome for a five year period in the late 1990s. Other teams have also occupied Rogers Centre on a part-time basis, with the Buffalo Bills of the NFL and Toronto FC of the MLS playing there on occasion.

In terms of entertainment, Rogers Centre is a hub for it, with big names like Bon Jovi and Metallica regularly visiting when there aren't sporting events scheduled.

What events are at Rogers Centre?

How much are tickets at Rogers Centre?

Where is Rogers Centre?

Image credit for Toronto Blue Jays: This image is available through Creative Commons (@somethingness - Flickr) and has been modified from the original. Email images@seatgeek.com with any questions.